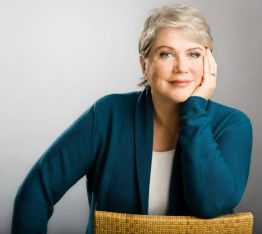 Shrill is based on Lindy West’s bestselling 2016 memoir, Shrill: Notes from a Loud Woman. Written by West, Ali Rushfield, and Bryant, it tells the story of a fat young woman, Annie (Bryant) who wants to change her life, but not her body.

Rushfield serves as the showrunner of the series. Jesse Peretz directs and executive produces the first episode; Carrie Brownstein directs the second episode.

Sweeney is best known for her years on Saturday Night Live, where she most famously created the character of Pat, which ultimately led to her writing and starring in the feature film, It’s Pat. She then went on to write and perform a number of critically acclaimed monologues, God Said Ha!, In the Family Way, Letting Go of God and, currently Julia Sweeney: Older & Wider.

Sweeney took a decade off from her acting career to raise her daughter in suburban Chicago, and, with her daughter off to college as a freshman, she recently moved back to Los Angeles to resume her career as a writer and performer. Sweeney is repped by WME, Thruline Entertainment, and Nelson Davis.’