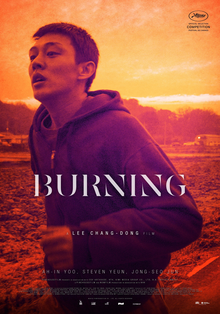 ‘Lee Chang-dong’s drama Burning has been selected by South Korea as its submission for the Foreign Language Oscar race this year. Burning made its debut at Cannes in May where it won the FIPRESCI. It’s also headed for Toronto, Fantastic Fest and the New York Film Festival. The film, loosely based on Haruki Murakami’s short story Barn Burning, features Korean-American actor Steven Yeun (The Walking Dead) in his first starring role in a local pic.

It’s an examination of an alienated young man, Jongsu (Yoo Ah-In), a frustrated introvert whose already difficult life is complicated by the appearance of two people into his orbit: first, Haemi (newcomer Jeon Jong-seo), a spirited woman who offers romantic possibility, and then, Ben (Yeun), a wealthy and sophisticated young man she returns from a trip with. When Jongsu learns of Ben’s mysterious hobby and Haemi suddenly disappears, his confusion and obsessions begin to mount, culminating in a stunning finale.

This is the third of Lee’s features to be the official Oscar entry from Korea after 2002’s Oasis and 2007’s Secret Sunshine. For a market with such a vibrant local industry, it’s surprising that Korea has never had an FL nomination, nor been shortlisted.

Well Go USA holds domestic distribution rights to Burning, and will release it theatrically in New York on October 26, and in Los Angeles on November 2, with a national rollout to follow. At home, the movie released in May and made $4.2M.’