‘Alan Tudyk has been cast in the lead role in the upcoming “Resident Alien” pilot at Syfy.

The pilot is based on the Dark Horse comics series of the same name. Tudyk will play an alien that crash landed in the little town of Patience, Colorado and takes over the body of Doctor Harry Vanderspeigle, one of the town’s most reclusive citizens. The alien is up to no good, but his mission is sidetracked when the doctor is murdered and the alien is forced to take his place.

Tudyk recently starred in the film “Rogue One: A Star Wars Story” and was cast in the upcoming DC Universe TV series “Doom Patrol” in the role of Mr. Nobody. His other feature credits include “28 Days,” “Dodgeball,” “Frozen,” and “Moana.” He is also known for his role on the cult series “Firefly” and the film follow up “Serenity.” He is repped by Gersh and The Coronel Group. 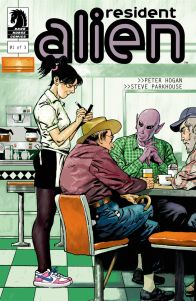 In addition to Tudyk, Syfy has also rounded out the main cast of “Resident Alien.” Sara Tomko has been cast in the series regular role of Asta Twelvetrees.

Tomko is known for her recurring roles on “Sneaky Pete” and “Once Upon a Time,” as well as her appearances on “The Leftovers” and “The Son.” She is repped by Bohemia Group and KMR Talent.

Corey Reynolds has been cast in the series regular role of Sheriff Mike Thompson. Best known for his role on the series “The Closer,” Reynolds can be seen next in the “Redline” and “Criminal Minds.” He has also recurred on “NCIS: Los Angeles, ” “Masters of Sex” and “Murder in the First.” Reynolds is repped by Industry Entertainment, The Kohner Agency, and Morris Yorn.

Alice Wetterlund has been cast in the series regular role of D’arcy. A former Olympic snowboarder, D’arcy Morin has traded in her snowboard for skiis and a mortar launcher that she uses to clear avalanches and occasionally blow off steam.

Wetterlund is known for her characters on “Silicon Valley” and “People of Earth” and recently appeared in an ensemble with Adam Devine, Zac Efron, Aubrey Plaza and Anna Kendrick in the movie “Mike and Dave Need Wedding Dates.” She has also performed her stand up on “Conan,” Comedy Central, and currently co-hosts the podcast “Treks and the City” with Veronica Osorio. She is repped by CAA and 3 Arts entertainment

Finally, Levi Fiehler has been cast in the series regular role of Ben Hawthorne. The 20 something fresh out of college thought being mayor of a tiny town like Patience would be a fun thing to add to his resume. Fiehler starred in the limited series “Mars” produced by Imagine Entertainment which premieres in November 2018. Prior to that, he starred in the CBS pilot “Mission Control.” Fiehler is represented by Defining Artists Talent Agency, Luber Roklin, and Stone Genow.

UCP is producing as part of their first-look deal with Dark Horse Entertainment.’