Netflix is expanding its sci-fi/genre portfolio with two new series orders with October Faction, based on the IDW comics by Steve Niles, and Warrior Nun, inspired by the manga series.

They join the recently picked up new sci-fi series The I-Word, The Order, Wu Assassins, Locke & Key, V Wars, and Another Life as Netflix is making in big push in the genre arena as is rival Amazon.

Here are details about the three newly ordered series: 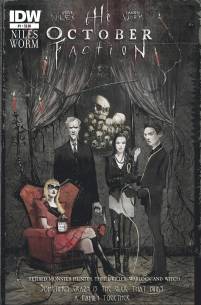 October Faction – Building on the IDW comic book series, October Faction follows globetrotting monster hunters Fred and Deloris Allen who, after the death of Fred’s father, return to their hometown in upstate New York with their teenage children Geoff and Viv. As the family adjusts, Fred and Deloris must hide their identities as members of a secret organization, and our heroes quickly discover that their new small-town setting isn’t as idyllic as it seems.

Inspired by the manga series, Warrior Nun revolves around a 19-year-old woman who wakes up in a morgue with a new lease on life and a divine artifact embedded in her back. She discovers she is now part of an ancient order that has been tasked with fighting demons on Earth, and powerful forces representing both heaven and hell want to find and control her.

El Masri is repped by UTA.