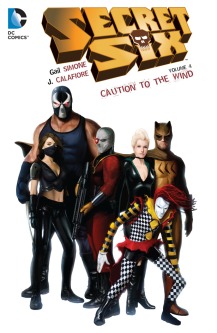 ‘CBS is developing a drama series based on the DC Comics property “Secret Six,” Variety has learned.

The project, which has received a pilot production commitment at the network, follows six morally ambiguous strangers, each with their own unique specialties and secret pasts. They are brought together by an enigmatic figure who blackmails them into working as a team to expose the corruption of the corporate and political elite.

Various DC Comics characters have been members of the Secret Six over the years, including Bane, Harley Quinn, Lex Luthor, the Mad Hatter, and the Penguin. There is no word yet, however, on which characters would appear in the series.

Rick Muirragui will write and executive produce, with Bill Lawrence and Jeff Ingold executive producing via Doozer Productions. Warner Bros. Television, where Doozer is under an overall deal, will produce.

Muirragui most recently worked as a co-executive producer and writer on USA Network’s hit drama “Suits.” His previous credits also include “Men of a Certain Age,” “The Good Guys,” “Charmed,” and “Past Life.” He is repped by UTA and Hansen Jacobson.

Lawrence is best known for creating the hit comedy series “Scrubs.” He also recently worked with CBS to develop “Rush Hour” as a series starring Justin Hires and Jon Foo. His other credits include “Spin City,” “Cougar Town,” and “Undateable.” Lawrence and Doozer Productions are repped by ICM and Morris Yorn.

DC has enjoyed a robust TV business in recent years, with five DC shows currently airing on The CW. That includes “Supergirl,” which originally aired on CBS. “Gotham” is also prepping its last season on Fox, while Syfy airs the Superman prequel series “Krypton.” DC also launched the streaming service DC Universe in September, with its first live-action offering “Titans” set to launch on Oct. 12.’