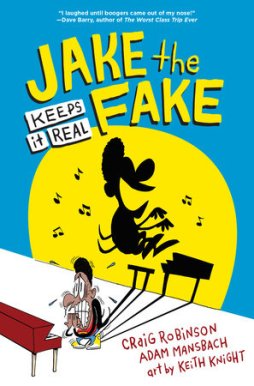 ‘Jake the Fake Keeps It Real, the first book in an illustrated series by New York Times bestselling author Adam Mansbach and comedian Craig Robinson(The Office), is in the works for the small screen. Mansbach and Robinson are adapting the novel for a potential TV series at Disney Channel.
The book tells the story of Jake, who can barely play an instrument, not even a kazoo. And his art? It’s better suited for Pictionary than Picasso. Which is a real problem because Jake just faked his way into the Music and Art Academy for the gifted and talented (and Jake is pretty sure he is neither). More jokester than composer, Jake will have to think of something quick before the last laugh is on him.
Jake the Fake is the first book in the trilogy published by Penguin Random House. The second is being released early next year.
Mansbach will write the pilot and serve as executive producer alongside Robinson for the project, which is in very early development.

Mansbach wrote Netflix’s film Barry, a look into the early life of President Barack Obama, for which he was nominated for an Independent Spirit Award and an NAACP Image Award. The author of a dozen other books, Mansbach is also the recipient of a California Book Award and a Sundance Screenwriting Fellowship.

The Office alum Robinson most recently recurred on Brooklyn Nine-Nine and Mr. Robot.

Mansbach is repped by Verve, 3Arts and attorney Eric Suddleson at Felker, Toczek. Robinson is repped by UTA and 3 Arts.’