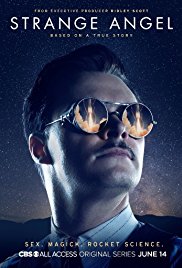 ‘CBS All Access has given an official second season renewal of period original series Strange Angel, from Scott Free Prods. and CBS TV Studios. The pickup comes a month and a half after the series ended its 10-episode freshman run on the streaming platform. Strange Angel extends the perfect renewal record at CBS All Access, which is yet to cancel an original scripted series. It joins The Good Fight, also from Scott Free, which has been renewed for a third season, and Star Trek: Discovery and No Activity, both picked up for a second.

Strange Angel, which migrated to CBS All Access after going through extensive development and a writers room at AMC, explores the bizarre true story of Jack Parsons, a man who straddled the worlds of science and the occult, pioneering America’s rocketry program while simultaneously practicing sex magick rituals and living by the creed “Do what thou wilt shall be the whole of the Law.”

At the conclusion of Season 1, Jack and his team from Caltech make a scientific breakthrough that secures the military’s interest as the country nears the brink of war. In season two, the U.S. is fully engaged in World War II, transforming Jack’s rocketry work into a lucrative business and further entrenching him in the military-industrial complex. While Jack’s career takes off, he and his wife Susan’s devotion to their new occult religion grows, leading them to invite the sex cult into their Pasadena mansion and to forge a personal relationship with the group’s notorious founder, Aleister Crowley himself.

“We look forward to exploring the next chapter of Jack Parsons’ journey,” said Julie McNamara, EVP, Original Content, CBS All Access. “Strange Angel and its talented cast and crew are the epitome of the type of programming we strive for at CBS All Access – daring, imaginative and unconventional.”

Created by Mark Heyman and based on George Pendle’s book of the same name, Strange Angel is inspired by the real-life story of Jack Parsons and explores the dramatic intersection between genius and madness, science and science fiction.